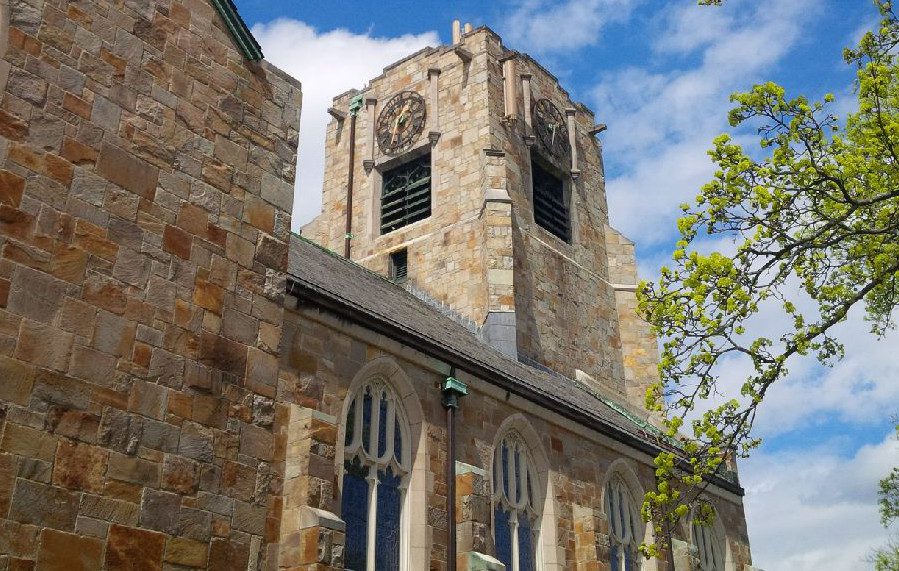 The next time you’re at 54 Lincoln Street–or driving by–take a look up at the clock and bell tower.

In the tower, the clock is located in a space above the balcony ceiling called the clock room. The clock was originally gravity driven. Chases for the weights were used for cables when T-Mobile installed cellular equipment in 1997. Cables run from T-Mobile’s equipment in the basement up to the top of the tower.

The bell room is situated above the clock room and contains the bell as well as the mechanism to drive the hands on the clock faces on three sides of the tower. A shaft through the floor connects the clock to the mechanism for the clock hands.

According to long-time NHCC member and treasurer Jim Harper, the NHCC bell was cast by the William Blake Foundry. Blake was a former apprentice of Paul Revere, and his firm carried on Paul Revere’s work.

The bell bears the name of the foundry as well as a year–1875–which was shortly after NHCC was organized. The original church structure was made of wood, with a spire. That building was replaced by the current stone building in 1905-06.

The bell is mounted on a large wheel, which originally permitted ringing by pulling a rope in addition to ringing using a chime controlled by the clock. The rope is still there, extending down to the clock room, but it is no longer functional; the bell’s movement is blocked, and bearings for the wheel are likely frozen. The hammer that currently hits the bell looks like a block of wood about 8” on each side.

The clock and bell are powered by a shared mechanism. States Jim, “I don’t know if the current mechanism predates electrification, as it has a drum that looks like it could have held a cable attached to a weight. Now it has two motors, one to keep time and the other to ring the bell. Think of a cuckoo clock with one weight for timekeeping and the other for sound.”

The bell room also contains large speakers whose purpose is not certain. Building and Grounds Committee chair Randy Ellis states that he “was once told was that they were leftover from WWII, available to alert people about attacks and bomb shelters, and the like.” Long-time NHCC member Peter Moore adds, “I do recall that many years ago they were used to broadcast the organ prelude to Sunday services.”

Read about a similar bell from the sound foundry, cast 12 years later.