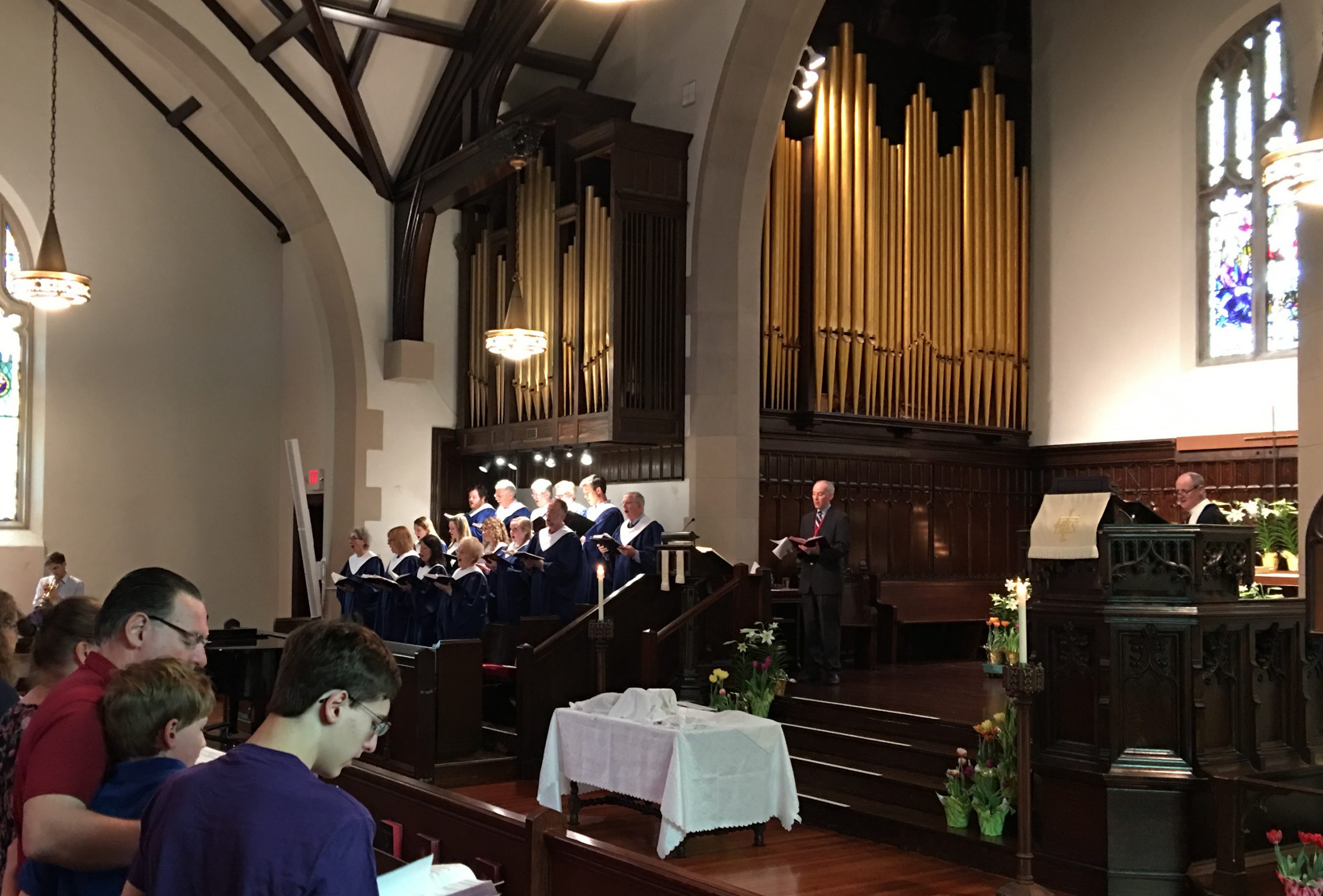 The pipe organ in the Newton Highlands Congregational Church, built by the eminent firm of Hook & Hastings, was installed in October 1924. The firm’s opus 2492, it replaced a smaller ten-stop instrument (also built by Hook & Hastings) that was removed to the neighboring church of St. Paul (Episcopal), where it remained in use until the 1950s.

The building of the new (i.e., present) church building in 1906 necessitated the installation of a larger instrument. This dream was realized in 1924, thanks to the generous donation of Mr. and Mrs. Fred R. Hayward, whose names are memorialized on a plaque attached to the organ.

In 1977 a new principal chorus (8′ 4′ 2 2/3′ 2′) was added to the Great, but the basic core of the historic Hook & Hastings instrument remains intact. In its present configuration the organ consists of thirty stops spread over three manual divisions and pedal. The Swell is located in a chamber to the right of the chancel, and the three remaining divisions (Great, Choir, Pedal) are located on the opposite side of the chancel. These three divisions speak into the nave through the façade of the unenclosed Great. The original draw-knob console, located in the left transept, was restored several years ago and then again in 2012. The organ has been well maintained over the almost 100 years since its installation, and it remains in good playing condition, capable of rendering a wide variety of historical literature for the instrument as well as supporting the worship needs of the congregation.

During the summer of 2000, the carpet in the sanctuary was removed so the floor could be refinished. The organ’s acoustics were so improved with the bare floor that organist Joe Dyer became convinced that the organ had originally been voiced with the floor bare. Accordingly, when the floor refinishing was completed and the carpeting replaced, the chancel and the front of the sanctuary were kept free from carpet to benefit acoustics for the choir, people speaking, and congregational singing, as well as for the organ.

By the end of 2022, the church will have completed a multi-year restoration of the organ including work on the console and all four divisions of the organ (choir, swell, great, and pedal).

The organ prelude usually begins about seven minutes before the 10:00 a.m. worship service.