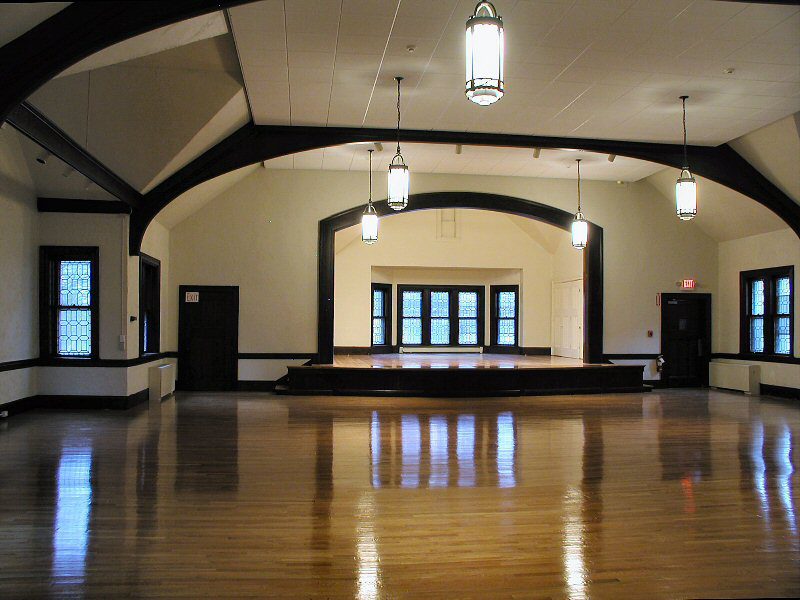 Beginning in about 1986, the New Repertory Theatre rented the Parish Hall and staged four to six plays per year. According to Alexander Stevens, an arts correspondent for Wicked Local, Larry Lane, the founding artistic director of the theatre, and a small group of fellow actors began looking for a location to stage their productions in the early 1980s.

I loved the space in Newton Highlands. I have amazingly fond memories of it. Every audience member was within about 15 feet of the stage. It was so close the actors had to be quiet backstage. We had to train the new actors where to walk…so that they’d avoid the squeaky floorboards. The church bells would go off during the show – sometimes at the absolute perfect moment, sometimes at the absolute worst.

In 2001-2002, the space under the Parish Hall was refinished into two classrooms for the Weekday Church School.

New Rep stayed at NHCC until 2005, when they moved to larger space in Watertown. At that point, NHCC reclaimed use of its Great Hall (Parish Hall). The hall was subsequently rented out for events and to dance groups, with NHCC retaining more usage rights.

The Opening Doors Capital Campaign from 2006-2009 raised about $450,000 in pledges to pay for the balance of the heating system, among other projects, as well as a 10% charitable commitment.

The Celebrate and Serve Capital Campaign from 2017-2020 raised about $525,000 in pledges to pay for a major restoration of the organ, among other projects, including a 10 percent charitable commitment.

In March 2020, NHCC suspended in-person worship on account of the Covid-19 pandemic. Through the leadership of Misha Hill and Rich Bryden, services were quickly moved online using Zoom. During the closure, the choir made a few recordings to be shown online. In June 2021, in-person worship resumed (fully masked) on a limited basis. The choir resumed in-person singing in January 2022.