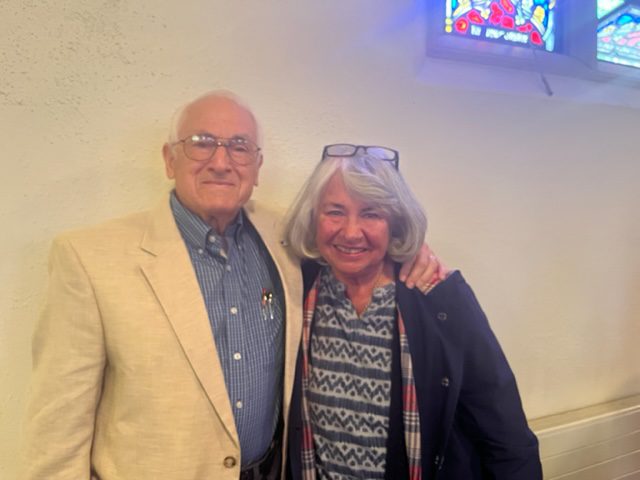 As we were putting together these thoughts we realized that we have been part of the church for more than half of the 150 years we are now celebrating!

Newton Highlands Congregational Church has always been an important part of our lives. Helen has lived in Newton Highlands her entire life and, since her parents were members, has always attended NHCC. She was christened by Ben Roberts as a baby. Bill started attending as a toddler when his parents moved to the Highlands.

Examples to us both: Our parents set the example of the importance of church in our lives. Helen’s parents ,Frank and Trudie Gowen, were married here in 1936, were members when Helen was born, and were always active in the life of NHCC. Both sang in the senior choir for many years, and Trudie also taught church school. Frank served terms on many church committees including the Deacons, but was probably best known for his many years serving on the Prudential Committee. He co-chaired the committee when the men of the church dug out and built Founder’s Hall underneath the sanctuary. Helen remembers crawling through a dirt pathway before they started the construction. Bill’s parents, Bill and Charlotte Lowery, were also very active, serving on a number of committees and making sure he and his sister didn’t miss any Sunday School. Bill has the perfect attendance pins to prove it.

Growing up we both attended Sunday school, and Helen sang in the junior and youth choir during the time Fred Groetsema was minister. Both of us became members after attending the pastor’s classes during our ninth-grade years. We finally got to know each other while attending youth fellowship, and started dating while we were rehearsing for our youth group play. We continued going together through high school (Newton High) and college (Northeastern University). After high school were active members of the Highlanders, a group of college students and young professionals loosely attached to the church.

On April 19, 1965, we were married here by Paul Pitman, and our reception was held in the church hall. After marriage we were fortunate enough to move into our apartment at 35 Oak Terrace, the home Helen’s grandfather had built in 1902, and we later purchased the house when the estate was settled.

Newton Highlands Congregational Church has always been an important and vital part of our lives. During the time we brought up our four children here we were always involved. Helen sang in the senior choir for many years and taught in our Weekday Nursery School. Bill served on many committees, including at least two terms as a Deacon, and was still serving when the women joined the group to form the Diaconate. Early on Bill became the youngest man to serve as chairman of the Deacons. Together we served on the search committee that brought Dudne Breeze to our church as minister. Shortly after that we helped to organize the YAS, a social group composed of young adults and many seminarians from Andover Newton Theological School in Newton Centre. That group was instrumental in organizing the first Progressive Supper at Christmas time.

Our four children were baptized here and eventually joined the Church on Easter Sunday of their ninth-grade years. Following in the footsteps of Helen’s parents and us, both our girls were also married here. Our daughter Martha helped run the nursery during her high school years. After graduating from college she returned home to help with the senior youth group and met our seminarian Matt Crebbin. Four years later they were married in our church by Jim Antal. After 11 years as minister of the UCC church in Hancock, NH, Matt became senior pastor of the Newtown Congregational Church in CT. He was chairman of the clergy association when the Sandy Hook school massacre occurred and has been active ever since in efforts to curb gun violence.

As we were putting together these thoughts we realized that we have been part of the church for more than half of the 150 years we are now celebrating!