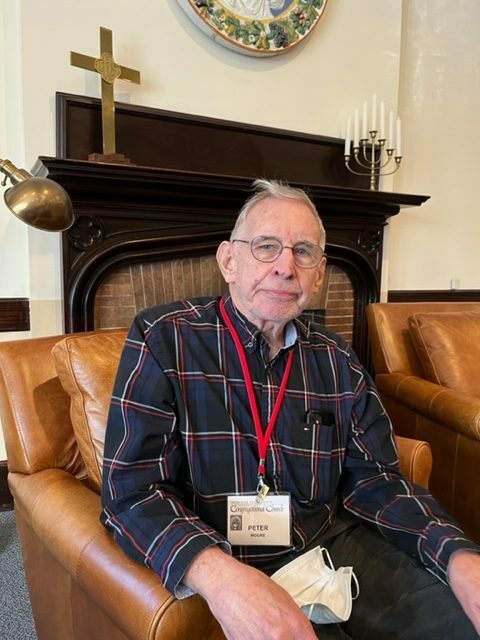 During, perhaps, my fifth or sixth grade class, the book we were studying was titled I will Build My Church. I remember it because I must have learned much from it.

My family moved to the Highlands in 1942 when I was two. My parents began attending NHCC shortly thereafter. Rev. Ben Roberts was the minister at that time. I don’t believe that I was baptized at NHCC, but most likely at a church in Malden, where my parents lived before moving to Newton. There was a Couples Club active at the Church then which helped introduce my parents to church members and the neighborhood. Rev. Roberts was succeeded by Rev. Frederick Groetsema, the first minister that I knew.

My earliest memories of NHCC were of church school and of the choirs. I may have been in the nursery class although I don’t have any memory of it. It was led by what I later learned was a legend at NHCC. Her name was ‘Mother’ Colton, and she had probably taught generations of young people even before my family had moved to Newton. She often brought her class up to the sanctuary to experience the opening of worship before returning to the classroom. Church school was held in the Great Hall; each class separated by movable partitions. During, perhaps, my fifth or sixth grade class, the book we were studying was titled I will Build My Church. I remember it because I must have learned much from it. NHCC had a church wchool superintendent position at that time. During my church school years, it was Dr. Wilfred Lake, an educator by profession. His wife Margaret sang in the Senior Choir and later donated the piano now in the parlor.

I progressed through church school, culminating in Rev. Groetsema’s Confirmation class. We met upstairs in the office now occupied by Wendy Donnell, our director of Christian Education. It was the pastor’s office then. That third floor area was greatly enlarged to create that space in the late 1940s. There is a plaque at the top of the stairs that gives the date and the name of the donor. I graduated and was confirmed by Rev. Groetsema in a ceremony with my classmates and made a member on Easter Day, 1955. Each new member was presented by Rev. Groetsema with a New Testament with his inscription and a reference to a passage from the New Testament.

Since around 1951, I had become active in the choirs of NHCC. There were three; a Children’s Choir, Junior Choir (also young people), and Senior Choir. They would occasionally sing together, particularly at Easter and probably Christmas too. The Children’s and Junior Choirs sang from a loft in the transept where the Good Shepherd window is located. I started in the Junior Choir where you received a cross on a colored ribbon, worn around your neck; your years of service were indicated by a different color of ribbon. My attendance was spotty, but the church, nevertheless, awarded me a cross on a gold chain which traditionally represented a graduation of sorts. Graduation was to the Senior Choir, where I started out in the Alto section, probably around 1955/1956, eventually moving to the tenor and then to the bass section, where I remained until 1970 when a new job requiring travel forced my exit.

During my years of service, the choirs were directed by the organist, and that position was held first by Harold Schwab, then Edward H. (Ned) Hastings, and finally by Carroll Hassman. Harold Schwab was the only one to have an office in the church. Its location is now the office of the church administrator/office manager, last held by Sarah Eberly. Where our minister’s office is now was then a robing room for the Children’s and Junior Choirs. There were several ‘choir mothers’ who assisted the young people with their robes and helped maintain order. On several occasions, I would help Harold Schwab tune the organ. He would get up into the organ chambers and adjust each pipe as I, at the console, would play each note from the keyboard. During Ned Hasting’s time we teamed with choirs from Central Church in Newtonville and Second Church in West Newton for joint concerts at the three churches; we sang Brahms’ Requiem on one occasion, and on another we sang Randall Thompson’s ‘Alleluia’ among other pieces. We also did a ‘Pops’ concert one year from the Great Hall stage during Ned Hastings’s term.

I fondly recall many of my colleagues from my Senior Choir years, one of whom, Marsha Vleck, is still active. Others I particularly remember are Darthea Wells, Clarice Reuter, Paul Wiggin, Ray Brian, and Russ Clark. Darthea (soprano), Clarice (contralto), Paul, and Ray (both tenors) were often soloists. Being long-enamored of the lower voice registers, I still remember the solos by Clarice. She had a very rich and sonorous voice, one of the loveliest I have ever heard. Russ Clark and I were colleagues in the bass section and Russ, too, had a glorious voice, and I am sure, perfect pitch. Russ helped me enormously with new pieces and was a mentor to me.

Other than serving in the choirs, I’ve served on various committees–Christian Education, Buildings & Grounds, and more recently, Mission. I’ve also been the church auditor for some thirty-plus years.

As to youth groups, I remember being active in the senior high and college-aged groups (the latter called The Highlanders, I believe). Advisors to these groups were often the youth ministers at NHCC; they were usually students at Andover Newton Theological School who served with us during segments of their years at Andover Newton. Three I remember particularly well were Charles R. (Chuck) Marble, Judy Hjorth, and Mike Henkle.

Building changes to the sanctuary

During Rev. Samuelson’s stay, I believe, several major changes were made to the sanctuary, most of which now remain. The present pews replaced older ones. Present chandeliers replaced large lantern-like fixtures with purple stained-glass coverings. The organ console, which used to be right in front of the Senior Choir loft, was moved to its present location in the corner of the transept where the Good Shepherd Window is located. The back wall of the chancel used to be a patterned design (green, white, and silver comes to mind), but was painted over to the white color we now have. The recently removed reredos, or screen in back of the altar, was also installed. As to the stained-glass windows in the nave and balcony, the present ones, I believe, were installed during Rev. Paul Pitman’s time. Previously, the windows were of a single color, like the ones now in the narthex (diamond shaped panes of a light purple color).

Founder’s Hall. This is the basement area now occupied by the C. G. Jung Institute. It was dug out during the 1950s (?) with church members doing some of the digging. It was used as additional meeting/activity/church school space.

The area in back of the kitchen, now occupied by church school and Pine Village Preschool, was originally a large open space used as a dining hall.

Robertson Chapel. In the Great Hall, the alcove against the side wall used to house a small chapel primarily for church school worship. It had a wooden rail in front, a lectern, an altar, reredos, and several chairs. It was later removed to Founder’s Hall and eventually dismantled, with much of it being donated to an outside group.