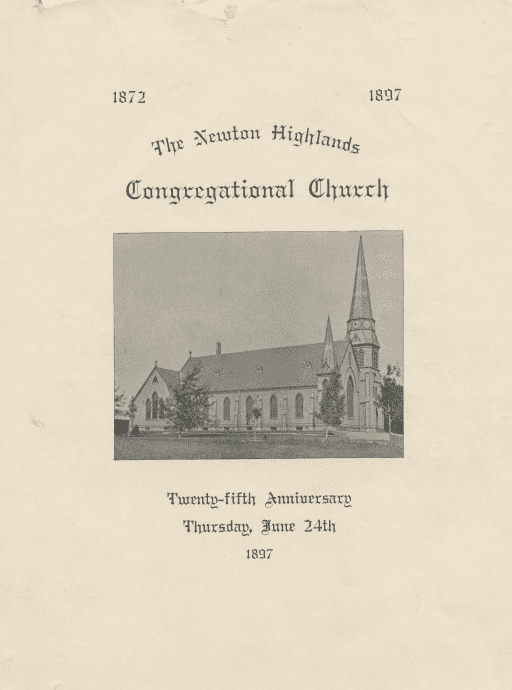 In his King’s Handbook of Newton (1889), M. F. Sweetser describes the site of the Newton Highlands Congregational Church as “pleasant and commanding…at the intersection of two of the principal streets,” looking “benignantly over the drowsy hamlet.” Erected in 1876, it was important to the community as a place where “the people enjoy their harvest festivals and corn sociables, and other pleasant reunions, besides the usual religious observances of the old Puritan faith.” Rebuilt in 1907 to accommodate a growing congregation, the present structure was designed by architect George F. Newton.

Newton Highlands was originally part of the parish of Newton Centre, which had been established at the end of the 17th century when Newton seceded from Cambridge. First Congregational Church dissolved in 1972; its building was taken over by the Greek Evangelical Church of Boston.

Newton Highlands developed following the construction of the Charles River Railroad in 1852. The first religious services were held in Farnham’s Hall in November 1871.

In 1888 Farnham’s Block was replaced by the Stevens Building.

On June 24, 1872, Newton Highlands Congregational Church was formally organized. A new chapel was built and first minister installed in October 1872. Its first meeting house was dedicated on January 25, 1876.

It is believed that the first meeting house had a reed organ. The Hayward family donated a small pipe organ in 1884, which was moved to the current building when it was built in 1905-1906.

In 1890 NHCC was reorganized under the Massachusetts Act of 1887. A certificate of incorporation was issued in December 1890, and assets were formally transferred to the new entity.

NHCC celebrated its 25th anniversary with a service on June 24, 1897. The Honorable James F. C. Hyde, a co-founder of the church and subsequently a mayor of the City of Newton, gave a historical address.