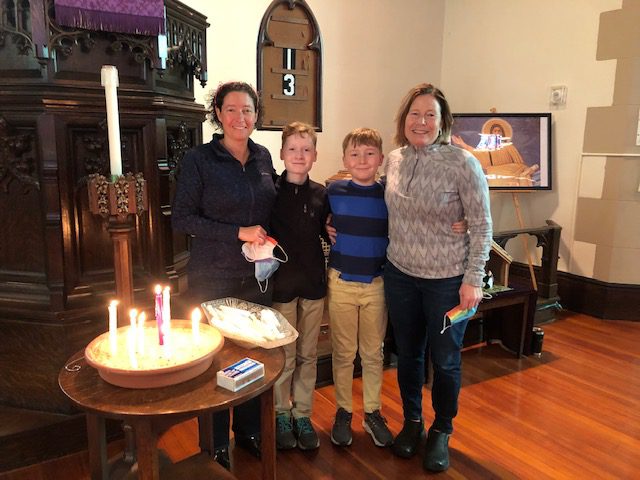 The McMahan Lawton family lit the candle of hope for Advent on Sunday, November 28, 2021.

Anna McMahan, Keirsten Lawton, and their sons, Lucas (6th grade), and Andrew (4th grade) live in Natick. Anna works as a physician and medical director at the Edward M. Kennedy Community Health Center (CHC) in Worcester. The CHC receives federal grants and provides health care services tailored to the community, which includes a large refugee and immigrant population. Clients receive care regardless of their ability to pay. Keirsten is a managing director and co-head of U.S. Private Equity Research at Cambridge Associates.

Anna and Keirsten met in 1999 while playing rugby after they graduated from college. They were introduced to NHCC through former members Matt Aufman and Cari Cornish; Cari and Keirsten went to high school together. Anna and Keirsten had been looking for a church to join. When they attended Jessie Aufman’s baptism at NHCC they felt at home, so they chose to begin worshipping here in the early 2000s.

Anna spent some time co-leading the youth group and even helped chaperone a mission trip to Tucson, AZ, where NHCC teens helped support water stations for people crossing the border.

In 2005, the Reverend Ken Baily performed Anna and Keirsten’s marriage ceremony at NHCC and then officiated at their wedding in Vermont. Both boys were baptized at NHCC, and both had the honor of performing as Baby Jesus in the Star Pageant. Anna is currently a member of the Christian Education Committee, and Keirsten serves on the Endowment Committee.

When not working or attending school, the family enjoys athletics. Keirsten was a champion downhill ski racer and is still the best skier in the family. She once skied downhill carrying both Anna (her binding had broken and she did not want to hike down) and a snowboard on her back! Anna admits that Lucas and Andrew now ski better than she does. The boys also play soccer and run cross country, and Anna sometimes referees rugby games. As for musical pursuits, Lucas is singing in a chorus, and Andrew plays saxophone.